Recently, my hike on the Nibelungensteig took me to the Main River valley, past the town of Amorbach and then over the hills towards Miltenberg. While both of these historic towns are important stops on the trail, the walk between the two is also very interesting and has plenty to offer to those who are fond of history, including both medieval and Celtic ruins.

Upon leaving the railway station in Amorbach, the trail immediately took me up the hill known as Gotthardsberg, home of Gotthard's Ruin. Due to its exposed location on the Roman frontier, the hill was in use as a signal station at least as far back as Roman times, and would have remained in use for that purpose until the area was overrun by Germanic tribes such as the Alemanni, Burgundians and Teutons in the 5th century.

At some point, near the time of the founding of the Amorbach Monastery in 714, the Frankish regional count, Ruthard, built a refuge castle of approximately 80 x 50 meters on the Gotthardsberg. In 1138, a chapel, dedicated to St. Godehard of Hildesheim and consecrated by Würzburg Bishop Embrico, was added, at which point the hill, previously called “Frankenberg” became known as “Gotthardsberg”. After the addition of the chapel, the castle itself was enlarged.

Thirty years after the construction of the chapel, in 1168,  Emperor Barbarossa, Frederick I, ordered that the castle be destroyed due to it being a danger to the Würzburg church, possibly because of its use by robber barons. Though the castle was razed, the chapel was preserved and then given to the church. A nunnery was built, which was supported by the Benedictine monastery in Amorbach.

During the Peasants' War in 1525 , all of the buildings belonging to the nunnery, except the church were burned down by Götz von Berlichingen, a mercenary knight with a long and interesting history of involvement in various battles, skirmishes and feuds. The church and priory was then rebuilt in 1628 - 1631 by the Benedictine monastery, and surprisingly, due to the presence of Swiss soldiers in Amorbach, was left unscathed during the Thirty Years War only to be destroyed by lightning in the early 18th century. Restoration and preservation projects in the 19th and 20th centuries led to the addition of an observation tower in 1878 and a new roof in 1956.

After leaving the ruin the trail leads in a northeasterly direction to the charming little hamlet of Reuenthal, home to a watermill which is believed to be on the site where the famous medieval minnesinger, Neidhart von Reuental, once lived.

Derived from the Middle High German word “Minne”, meaning “love”, Minnesang was a tradition of lyric- and song-writing in Germany that flourished in the Middle High German period, and was similar to the works of the troubadours of Provence. Minnesang began in the 12th century and continued into the 14th. People, like Neidhart, who wrote and performed Minnesang, were known as Minnesänger and a single song was called a Minnelied. Neidhart, who performed from at least 1210 to at least 1236 was one of the most famous of the Minnesänger and was probably active in the Duchy of Bavaria and is known to have been a singer at the court of Duke Frederick II of Austria in Vienna.

From Reuenthal, the path leads through the idyllic farming community of Monbrunn. In 2007, this little village, with only about 70 inhabitants, was chosen as one of the most beautiful villages in Bavaria.

Soon after leaving Monbrunn, I reached the top of the Greinberg, home of the Ringwall Greinberg, also known as the Römerschanze. This is a prehistoric wall-ditch site built by the Celts, though there is evidence that the area was inhabited even earlier by the Urnfeld people. You can still see traces of the three-kilometer-long rampart and trench. A ringwall existed as early as the late Hallstatt or early La Tène period, and finds from the Urnfield period (1300 b.c. - 750 b.c.)  have also been unearthed.

In addition to finds from the Bronze Age; the Urnfield, Hallstatt and La Tène period, there are also legacies of the Neolithic period and Roman Empire, including those from a temple to the god Mercury. Investigations have also revealed evidence from the Germanic Migration Period and the Franks. Many of the finds from the Greinberg are in the museum in Miltenberg.

If you'd like to see these sites for yourself, join Stage Six of the Nibelungensteig at the bottom of Gotthardsberg. From the train station in Amorbach turn right on the footpath beside the B47, and head towards the Lidl supermarket. Make  a right on Miltenbergerstrasse and cross the bridge leading over Bill Creek. Soon, you’ll see a green “N”, telling you that you are on a feeder spur, leading towards the trail. This will quickly turn into the red “N” of the main path.  Follow the trail over the hills and down into MIltenberg, where a quick train journey will take you back to Amorbach. The trail is approximately 13 kilometers, takes about four hours and is suitable for those of a reasonable fitness level. 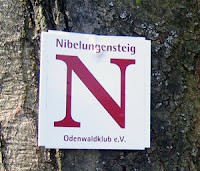